Angels Take the Stage for our 2nd Anniversary

They were a hit! 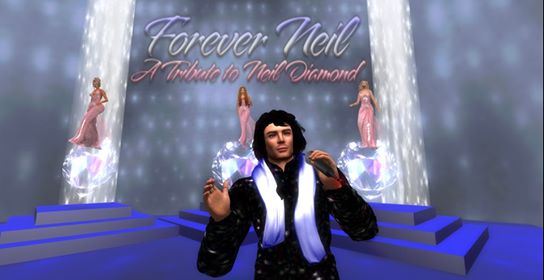 Videos coming and will be under the
​Music and Photos tab shortly
Thanks to ZDiva Sorbet for joining me on "You Don't Bring Me Flowers"
here it is:

When you come to a show by Austin, there is no guarantee what you might hear. His vast repertoire might have him doing Country one minute, Pop songs the next, and Crooning (like Sinatra, Buble, Como) the next.  On top of that is sprinkled in some rock and swing music.  In the past bit of time, besides using tracks, he has pulled out his guitar for a few tunes as well.

He was raised in music and played brass for many of his years, but changed to flute during his college years as a music major. His favorite course was conducting, but alas, has no orchestra to conduct in SL. He has played in orchestras and various bands, duos, etc in his life. While he was living and working in Africa he studied voice from a British instructor from the Kenya Conservatoire of Music. Urged to join the opera there, he politely declined. It was not his thing, and felt that if he wanted to find any favor with God, it's best to let the real opera singers take that stage. He has done solo performances for as few as a handful of people up to an audience of 5,000.

He proudly served his country in the United States Air Force and honors the men and women that dedicate their lives to protect our country and our freedoms.  Many of his songs reflect the gratitude he shows these brave people.

He sings totally live Tributes of Neil Diamond and Kenny Rogers. Those are not meant to be regular shows, but full-on Tributes with special stages and lighting which take days of preparation.

He began singing in SL a little over two years ago and has developed a song list covering many genres. He loves taking requests. If it is your RL or SL "birthdays" he will take time to sing you Happy Birthday!

​I am very grateful for these ladies who help me with staging, dancing, wardrobe, and the behind the scenes communication while in a show. I am a blessed man to have them with me!!!
Netera's Blog
Follow this blog to see the wonderful fashions these ladies wear!
​
https://austinsangels.home.blog/2019/01/05/our-journey-begins-to-find-glamorous-fashions-to-wear-during-austins-sets/
​
For Bookings contact me.
Copyright © 2019
Proudly powered by Weebly